This is the first in a series I’m calling The Great Stagnation, a concept I took from Peter Thiel. Thiel argues that the rate of technological progress in the western world has stagnated.

This post is reacting to a book by Scott Adams, Loserthink, which wasn’t very good. One particularly dumb chapter is called, “The Golden Age Filter.” The chapter argues that we are living in a sort “golden age” of technology and wellbeing.

“The Golden Age Filter” is divided into sections. In this post, I will critique each section.

It is true that poverty has fallen. However, that is thinking in reductionist terms. here is a more detailed graph of where the gains of income have gone:

As you can see, the gains in income have been enjoyed by the global poor and the very rich, while the “first world middle class” has stagnated.

This is the most egregious section. I’m going to need you to read this post and come back. TL;DR, the limiting factor on the number of homes is NOT construction, it is the amount of land that is available for development.

Technologies to build homes cheaply will not save people from their rents; part of their rents are paid the land underneath their homes.

Remember when I said “inexpensive homes” was the most egregious section? Scratch that, Adams is completely oblivious to the purpose of education.

Online learning is rapidly growing and is already cost-effective, but it is fairly primitive …

It may well be the case that you can become very well-educated online, but huge numbers of people will still blow $100,000 on traditional education, because they need that degree, and I don’t blame them. That’s the status quo, and better models of learning don’t beat the status trap.

Adams makes the case that, because there is so much information now that everyone leaves around, more crimes will be solved. This may be the case. But Adams doesn’t look at the potential downsides to this system.

Yes, the fact that there is so much data collection nowadays may help us solve crimes better. But it also reduces privacy and makes it easy for companies and governments to basically spy on everyone.

I don’t really care about this issue, both on the solving-crime side and the privacy side, but if you are going to acknowledge one side, you should at least acknowledge the other.

I’ll try not to spend too much time on this because even Adams seems to realize that the situation is not all rosey. Adam’s fundamental error in this section is the inability to account for black swan events. Here’s the thing about black swan events: the more infrequently they occur, the less information we have about them (information about how bad they will be when they do occur).

The globe could be increasingly “fragile,” meaning large wars are less and less common (to the point that we haven’t gotten one since WWII), but worse and worse when they occur (to the point where a war would mean the death of all humans).

Scott Adams spends a good section of the book railing against the idea that you can use the past to predict the future, but, in the chapter I’m criticizing (and especially this section), he seems to throw that to the wayside.

You still have reason for optimism because of the technologies that are already in the pipeline. And one can hardly imagine what we will see over the next eighty years.

This is what optimist futurists always say, “there are so many new technologies coming, we just have to wait!” Well, how long will we have to wait?

I am not very optimistic about CO2 scrubbers. We already have those, they’re called trees, and we won’t solve our climate issues just by planting them. Some problems are much easier to prevent than fix. I am not satisfied with “we’ll just clean it up later!” No, many problems are exponentially cheaper to fix when they are just starting.

On nuclear power, I share his support. Here’s the problem: many people do not. Regulations and political realities are not something that can be just ignored. There are massive political and logistical hurdles to overcome.

And this is a massive indictment of our society. How embarrassing, that we have failed to create, roll out, and proliferate nuclear power! So much for a “Golden Age.”

In this section, Adams basically repeats the errors of the previous sections. I have a post about this topic. I can see technological unemployment becoming a problem, but on the other hand, I am skeptical that there is that much technological innovation in the first place.

In this section, Adams makes a lot of the same errors as he did in the climate change section. Instead of addressing them one by one, I will talk about healthcare in broad strokes.

You have probably heard of Moore’s law: computing power doubles about every 2 years. This has driving the mind-blowing progress in computing technology we have seen recently. But you may not have heard of Eroom’s law: the cost to develop a new drug doubles every 9 years.

This is unbelievable to me. Eroom’s law can be largely blamed on the fact that it costs a billion dollars to get through the FDA, and more every year. The healthcare system is so dumb, pro-status-quo, bureaucratic, anticompetitive, and averse to innovation that it deserves to be completely overhauled.

With the human ingenuity we have available, we should be developing radical life-extending technologies. Instead, life expectancy has been, if anything, falling.

I will also note that healthcare spending in the US is insane, for not that much better outcomes. 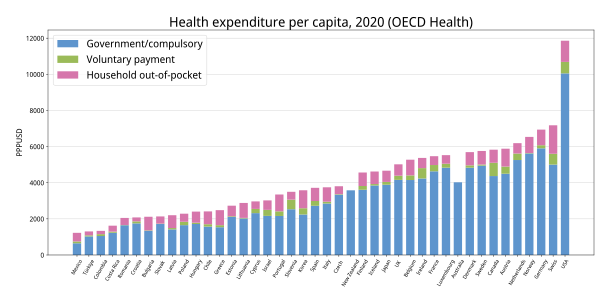 I’m going to plug another one of my own posts, the identity politics one. Race relations will continue to get worse to the extent they can be exploited by media and political machines. You need to account for the rise of militant social justice that started in around 2013.

It looks like far-left politicians just realized they could wait and watch demographic changes take place, allowing them to make increasingly more far-out demands. Reparations, a policy totally beyond the pale by my standards, are now being proposed by actual politicians. I don’t really see the situation improving long-term. Adam’s milquetoast takes and Trump-defense doesn’t address these points.