This article was written by a different author than usual. It is a contribution from the editor.

Something that has been mentioned previously on this blog is how culture is influenced by natural selection. A society’s culture acts much in the same way as a species’ genome, as they are both products of and determining factors in succeeding through natural selection. This analogy is helpful because it enables us to see society’s mindsets and customs as operating similar to certain genes within its cultural genome.

There is a cultural gene within western society that is relatively unique to the west, and is foundational to its makeup. This gene is a belief or mindset rooted in the tenets Christian theology, and is expressed in the bible through a number of passages, some of which being:

“But I say unto you, Love your enemies, bless them that curse you, do good to them that hate you, and pray for them which despitefully use you, and persecute you” Matt 5:44

“do good, and lend, expecting nothing in return; and your reward will be great, and you will be sons of the Most High; for He Himself is kind to ungrateful and evil men.” Luke 6:35

“Do not rejoice when your enemy falls, And do not let your heart be glad when he stumbles” Proverbs 24:17

“You have heard that it was said, ‘Eye for eye, and tooth for tooth. But I tell you, do not resist an evil person. If anyone slaps you on the right cheek, turn to them the other cheek also. And if anyone wants to sue you and take your shirt, hand over your coat as well.” Matthew 5:38-40

Through the radical idea of loving one’s enemy, these passages all advocate for the idea that others should be helped at one’s own expense, even if it allows others to inflict harm on the individual offering help. A common theme of the Bible is giving up worldly items and being righteous in order to reap the rewards of divine salvation. What I found particularly interesting in this notion of Christian faith is that if followed to its fullest, it would mean everyone in society would always choose the “cooperate” option in a game theory decision. In essence, the west is able to “beat” a trap of game theory, where under normal logical conditions players will otherwise always choose to “cheat” in order to cover their back. Unlike the other possible situations which would lead to both individuals agreeing to pick “cooperate,” the amazing part of this Christian mindset is that it applies universally to all individuals within society, and does not necessitate trust.

This is no small feat. Game theory is fundamental to much of society’s operations, and comes into play almost any time another’s decision will influence one’s own, which is usually the case. Its importance is demonstrated by the fact that tenets of faith are necessary for enforcing behavior that contradicts what game theory dictates as the logical decision. If an almighty who determines if you live in eternal heaven or eternal hell needs to come into play to ensure a certain type of behavior, it can be said that it would be hard to enforce it otherwise.

This ideology has powerful consequences, with implementation having the possibility of leading to drastically different circumstances. If everyone is on board, group cohesiveness, trust, safety, and direction skyrockets. I believe this was a driving factor behind the west’s success as a culture. I once attended a lecture by Daniel Coyle in which he discussed his New York Times Bestselling book: The Culture Code: The Secrets of Highly Successful Groups. In it he argued that a group’s culture is on of the biggest factors in its success. More importantly, he laid out a diagram of which cultures succeed, which looks like this:

We see the first scenario in the cases of martyrdom, which are abundant within Christian literature. Unsurprisingly, stories of martyrdom are more frequent in early Christianity, when Christian communities are first forming and are therefore inevitably more likely to be minorities. Instead of forming coalitions to fight against the dominant force, Christian individuals embrace and champion submission, demonstrating the situational extreme in which they are still willing to pick the “cooperate” option. Many martyr stories, such as that of Polycarp, make deliberate parallels to the story of Christ. This clearly shows the radical extent to which cooperating in game-theory scenarios is embedded within the Christian mindset, and by extension the overall mindset of the west.

We see examples of the second scenario in current contemporary issues, especially in that of welcoming refugees. One may argue that the west has lost much of its Christian ideological base, and this may be true, but that does not mean that current western mindsets are not still a fundamental product of Christian thought. The west is unique in that it is one of the only cultures to demonstrate wide-spread out-group preference. In this area we see where Christianity’s extremist game-theory strategy experiences its downfall. If one chooses to continuously cooperate and aid outside groups which do not have the same intentions, it only drains givers and strengthens the receivers. In order to succeed, the psychological appeal in the beauty of giving and suffering or the societal connection formed through repeated and unconditional cooperation must win conversions or else it cannot succeed.

China is a country of contradictions. It is the longest civilization but one of the least civil, it creates the most but is the least creative, and it can somehow manage to maintain a state that is simultaneously in both complete chaos and complete crackdown. China is a country that is like a machine in which each individual part is broken but as a whole somehow manages to chug along.

Pertaining to my theory, it’s cultural gene does the exact opposite of Christianity but enables it to succeed just to same. To establish some context, China’s base unit of society are social circles rather than the individual. These social circles traditionally manifested itself as the family. The formation of social circles is ubiquitous across all human societies, but China takes this to the next level by cementing them as a defined and fundamental part of its culture which strictly regulates the way in which broader society interacts. While the western concept of citizenship means that every individual tends to share a base level of respect for each other’s humanity, China does not have this construction. For the Chinese, people who exist fully outside of one’s social circle and do not offer any potential to benefit their social circle do not have any value. I like to visualize this concept as mountains, where the width of the mountain is the number of people and the height of the mountain is vale one felt towards those people. In western society, we would see a number of shallow hills, while in Chinese society we would see steep plateaus. 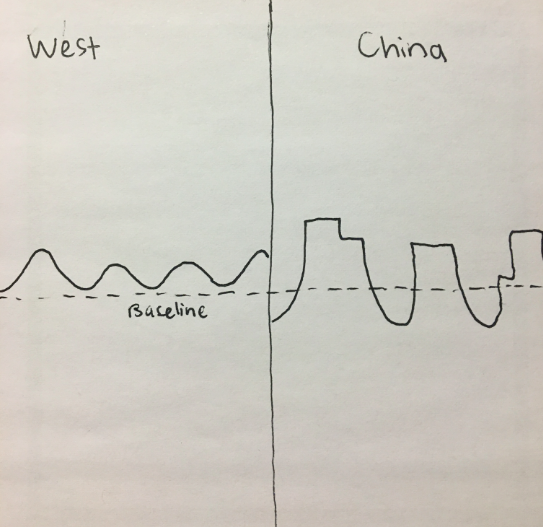 Interestingly, in Daniel Coyle’s speech about group culture he said that instead of building safety, sharing vulnerability, and establishing purpose, you can establish fear, mandate obedience, and decide direction respectively. Where credit’s due, he said the latter method can work just as well. I believe this also reflects the dichotomy between the West and the China’s social management styles.

While working within these social circles, Chinese culture embraces the “cheat” option of game theory in every way and take it to the extreme. Any manner in which that circle can get ahead, regardless of how it detriments broader society or even individuals within the group go’s. I theorize that by embracing competition in every form, the culture is held together as a whole. Society moves forward by all of these circles working against each other; through Darwinist competition, a balance of power forms amongst millions of circles, bringing all of society towards a greater end. The weak die off, and millions of factional connections are formed that eventually establishes the Chinese ideal form of society.

This idea of going to the extreme “compete” end of game theory competition to move society forward through balance of power was partially inspired by Henry Kissinger’s discussion of balance of power politics in Europe in the early modern era (just replace the word “state” with “social circle) in his book Diplomacy (p67-68):

States were no longer restrained by the pretense of a moral code. If the good of the state was the highest value, the duty of the ruler was the aggrandizement and promotion of his glory. The stronger would seek to dominate, and the weaker would resist by forming coalitions to augment their individual strengths. If the coalition was powerful enough to check the aggressor, a balance of power emerged; if not, some country would achieve hegemony. The outcome was not foreordained and was therefore tested by frequent wars.

More importantly, this dynamic leads to a “Faith that out of a clash of competing interests harmony and fairness would emerge. The elimination of conflict was utopian; the solution was to harness or counterpoise the inherent flaws of human nature to produce the best possible long-term outcome.” (Notice how “human nature” here refers to picking the compete option in a game theory decision)

Although Kissinger offers the disclaimer that there was not “a shred of evidence that the conscious goal was to implement any general notion of international order,” he points to how “The philosophers of the enlightenment viewed the international system as part of a universe operating like a great clockwork which, never standing still, inexorably advanced toward a better world.”